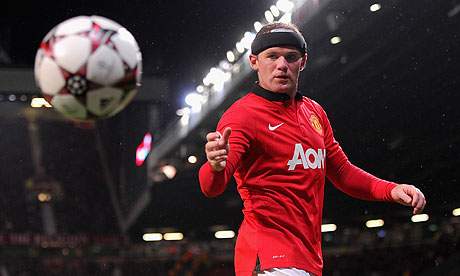 Wayne Rooney joined the small and exclusive band of Manchester United footballers to score 200 goals for the club but still could not bring himself to say he was happy at Old Trafford.

Rooney’s two goals in United’s 4-2 win against Bayer Leverkusen saw him join Sir Bobby Charlton, Denis Law and Jack Rowley in the quartet of players to reach the double-century, but the striker reacted indignantly when he was asked if he was “happy again”.

“Listen, I’m concentrating on my football, as I’ve done all summer,” Rooney said. “I got my head down and worked hard to get myself fit and ready for the season. I’m delighted with the way I’ve come back, delighted that I’m back playing and scoring goals.”

Rooney was then asked a direct question about whether he had asked to leave United. “Listen,” he said. “I’ve just told you. I’m concentrating on my football, which I’ve been doing all summer.”

His irritation was obvious on a night that also saw manager David Moyesreiterate how important it was to keep Rooney at the club in the face of prolonged interest from Chelsea and the added knowledge of knowing that the player wanted to move to Stamford Bridge.

“I knew that if you are going to win the Champions League you need to have several world-class players, and Wayne certainly comes into that category,” Moyes said. “You can see what other teams have and we have to keep adding to that and keep the ones we have here.”

The United manager added: “I thought he played really well. I remember saying he had a real chance to be one of the all-time leading goalscorers at this club and if he keeps playing like he did tonight, he’ll get there.

“It was something we made him aware of in the summer. I wanted to get him back in really good condition and mentally correct for when he was ready to play. He is now moving as well as he has done. He is in a good place at the moment. Any centre-forward who is scoring goals feels good about himself.

Sami Hyypia, the Bayer Leverkusen manager, also paid tribute to the England international. “He has done it for years already and he has still a few years. It looks so easy, how he is playing. He showed tonight he is a top-quality player.”

Rooney was given a standing ovation when he was substituted, having scored the first and third goals in a match that also saw Robin van Persie and Antonio Valencia on target, making it a hugely satisfying first night for Moyes as a Champions League manager.

Afterwards Rooney thanked the Old Trafford crowd for their support. “The fans have been brilliant and fantastic with me. It’s great the reception I get and hopefully I can repay them with goals and performances. To score 200 for United is great for me. I’m very proud. I’m delighted first of all to be playing and scoring and it’s a good result. The first game in the Champions League is always important.”

Moyes was equally content: “I thought they [the team] played ever so well and scored four good goals and maybe could’ve added to that. I was really pleased.”