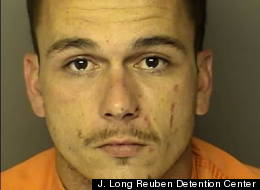 A South Carolina man is accused of assaulting his girlfriend during a three-way with her and her cousin.

The kissin’ cousins angered Jenkins, according to the report. He allegedly grabbed his girlfriend’s hair and dragged her off of her relative before hitting her in the head and face and kicking her in the stomach. The officer noted a 3-inch scratch mark on the woman’s neck.

Jenkins, who claimed he did not hit either woman, was taken to jail. He was released the same day, and at 8 p.m., his girlfriend called police to say that Jenkins came to her home and attacked her again, hitting her in the chest before taking her cell phone and car.

Officials tracked Jenkins down and threw him in the slammer again on a second domestic violence charge, along with a charge of use of vehicle without consent.