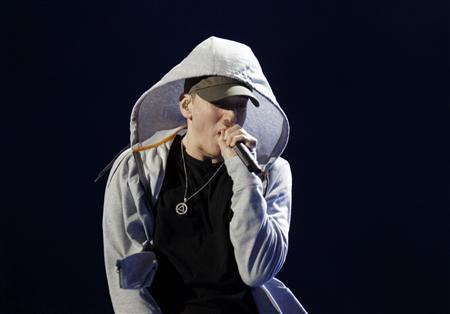 (Reuters) – Rapper Eminem’s latest album debuted with the second-largest opening sales week this year, rocketing to the top of the weekly Billboard 200 music chart on Wednesday.

“The Marshall Mathers LP 2,” Eminem’s eighth studio album and seventh to reach No. 1, sold 792,000 copies in its first week, according to figures from Nielsen SoundScan.

The album falls only behind singer Justin Timberlake’s “The 20/20 Experience,” which opened in March with 968,000 copies, for top opening sales week this year.

Eminem’s new album is a continuation of the rapper’s 2000 breakthrough record “The Marshall Mathers LP,” which came in at No. 30 on the Billboard 200 chart this week with sales of 10,000.

Three other new albums debuted in the top 10 of the Billboard 200 this week. Canadian singer Celine Dion landed at No. 2 with her 11th English-language album, “Loved Me Back to Life,” which sold 76,000 copies.

Another Canadian artist, punk-pop singer Avril Lavigne, debuted at No. 5 with her self-titled album selling 44,000 copies, while five-piece a cappella group Pentatonix came in at No. 10 with “PTX, Vol. II.”

Last week’s chart-topper, Arcade Fire’s “Reflektor,” dropped from No. 1 to No. 9 this week.

Overall album sales for the week ending November 10 totaled 5.68 million units, up 4 percent from the comparable week in 2012, Billboard said. Next week’s chart is likely to get a shake-up from pop singer Lady Gaga’s new album, “ARTPOP.”

On the Digital Songs chart, which measures digital track downloads, newcomer indie-pop band A Great Big World scored the top spot with the debut single “Say Something,” featuring Christina Aguilera, who performed the song on the NBC show “The Voice” last week.

New Zealand singer Lorde’s “Royals” rose one spot to No. 2, and U.S. pop-rock band OneRepublic rounded out the top three with “Counting Stars.”